I've spent my morning at my Gran's waiting for the Doc once again, she rang Mum this morning said not well and put the phone down! Mum rang her back and she doesn't remember doing it anyway her vision is alot worse than normal and she felt really ill so Mum called the Doc.
Doc thinks that going on her past history and the last 2 visits when Gran has been very confused she has yet another water infection so she has yet another round of antibiotics to take.
It would help if she changed her 'nappy' more than once a day but we can't make her understand that, sometimes it's like talking to a brick wall with her (at times I think we'd have more luck if we did!)
Posted by Lindsay at 14:16 No comments:

It's been one of those days today where no matter what I've been doing there's been some sort of hold up.
Started out with Mum not being ready on time to go to our weekly beading class, so we were late arriving there then we were later than normal leaving so we got stuck in traffice that we normally miss.
Then on the way to the weekly thing with DD our normal route was blocked by Police so we went through the village and discovered that the other route was bloacked off by Police as well so I had to turn round and go through town which meant hitting the start of rush hour.
Then there's the bridge to get over that's traffic light controlled as it's only wide enough for one car at a time and there's always a queue to get over it the size of which depends on the time of day.
As I got to the thing my phone rang and it was someone calling to find out where we were and of we were caught up in the accident that had caused the first route to be blocked off.

Once at the thing my hands decided that they weren't going to play ball and I sat there for the biggest part of an hour unable to move more than my thumbs until a bowl of warm water was brought for me.

I'm glad I'm home with my needles and floss now and I just hope the frogs don't pick today to make a visit
Posted by Lindsay at 20:41 1 comment:

Ooooo, well that was interesting
There's just been a van full of Policeman in full riot kit outside my house!
I was stood in the kitchen being nosey and one of the PCSO's saw me and said something so I went out and he said it was nothing to worry out about, I wasn't worried just nosey.
Anyway it turns out they were there to break the door down on one of the house's across the way under the misuse of drugs act.
It appears that there has been several reports from neighbours about it, well I never get to see anything because I'm off to the side and my living room doesn't over look the parking area so had no idea about it.

I've had quite along chat to him about a few things and he's told me that sometime over the next few weeks a speed trap will be appearing somewhere along the main road I live off and on the main dual carrigeway through the centre of town and it's about time too.
Posted by Lindsay at 15:54 No comments: 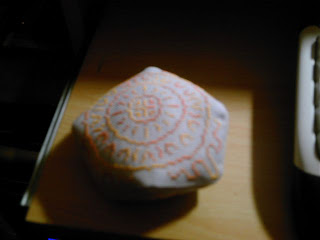 A second finish from Thursday, my first Biscornu. I can see there being more of them in my future
Posted by Lindsay at 14:36 1 comment: 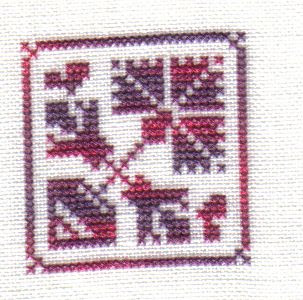 Hot off the scanner, my latest Happy Dance.

Back in June I went on a weekend GTG with some of the UK girls and while there I mentioned that I'd like to try stitching on 40 count and would have to try and get hold of small piece, anyway one of the girls there rarely stitches on anything else and told me to cut a piece off her stash she had with her.

Well I found out that the MG failed it's MOT, it needs a small patch of welding doing somewhere so I didn't have to go back and pick it up today which I'm glad about in a way cause it damp and cold outside!

I've spent the day doing some housework (well I hoovered up) and I've put a little under 2 hours in on my SL Daffs but that's it on that one for today, over one is hard going
Now I'm off to have a brew and decide what I'll work on this evening around my Bellydancing class and doing my Gran's food shop before I go and pick DD up from her after school coursework class/help session
Posted by Lindsay at 14:48 No comments:

I've had to take my cousin's car in for it's MOT today, nothing unusal about that you may think and you'd be quite right, however it's a classic MG and I've only been a passenger in it once never mind driven it!
It took me ages to get it into reserve so I could get if off the drive and boy I thought my car was heavy to drive, well this has it beat hands down and it feels like you have to brake 5 miles from a junction so it'll stop in time
I didn't half get some funny looks as I went down the road, not sure if cause I was drivning it or because it's so loud
Posted by Lindsay at 14:04 No comments: 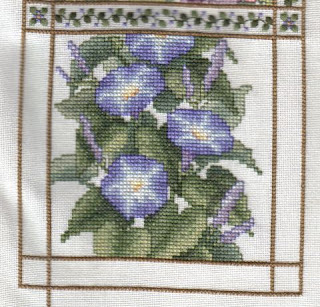 Labels: Floral Bellpull
I'm no longer a full time Domestic Engineer so I think I need a new name, time to put the thinking cap on
Posted by Lindsay at 18:09 No comments:

More playing about and I've managed to add a calendar to the side bar (only because they had an idiots guide on how to add it)
Posted by Lindsay at 12:46 No comments: My latest Happy Dance and a pratice at posting a pic, if I do decide to start using this place more than my current blog then I really need to make sure I can do this
Posted by Lindsay at 00:07 1 comment: