First of all last weekend's progress on MW. 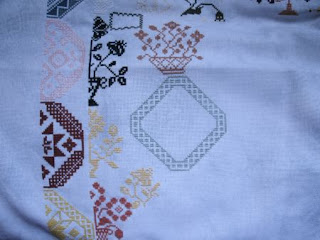 Yesterday I finally got around to unpacking the little sewing machine DBF gave me for Christmas and use it.  I've had the fabrics picked out for weeks but every time I've thought I'll do those tomorrow something happened or I just plain forgot I was going to do them and it was to late in the day when I remembered!

I'm posting them in the order they were stitched not the order I finished them and as ever the fabric behind is the one I used for the finishing.

First up is Christmas Peace from JCS ornie issue 2002 (didn't note the designer and I'm far to lazy to go and dig the issue out to look it up) stitched way back in January!
I used a scrap of fabric out of the box that I suspect is Cashel and the called Weeks & GAST apart from subbing Cyress for Cadet. 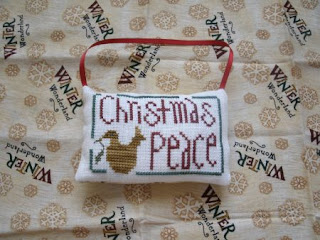 Next is Heartfelt Harvey from 2008 JCS ornie issue, designed by Imaginating INC.
He's on a scrap of 32 count and I used DMC 304.
He turned out larger than I thought he would so I made him into a little pillow so could get away with a large pattern fabric.  See the sleigh, santa and snowman on the left? Well that's what's on the back. 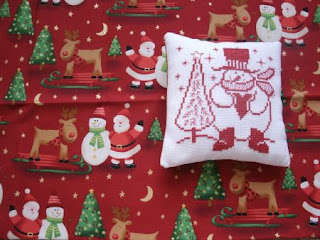 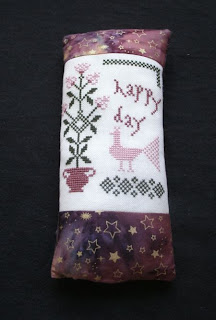 Lastly is the fob from LHN Needle and Thread.
Again I thought it was a little to big for a fob so I made it into a little ornie that I can hang on my stand with other bits and pieces of craft. 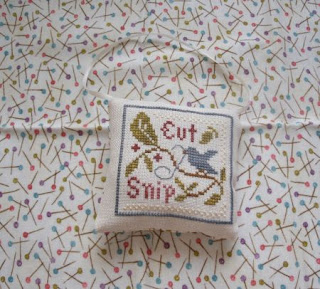 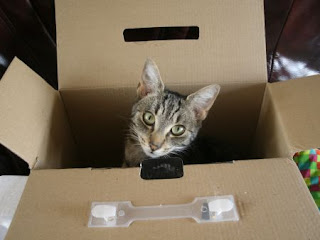 I really should of known that an empty box would soon be filled with a Rosie!

I had been planning on starting something else on my Birthday but unfortunately the chart didn't arrive before I left for Wales thanks to Royal Mail being their normal slow selves :(  Lucky I had a back up plan just in case (aka this has been calling to me for weeks) in the shape of Namaste from Ink Circles.

Here's how it came back home with me last weekend 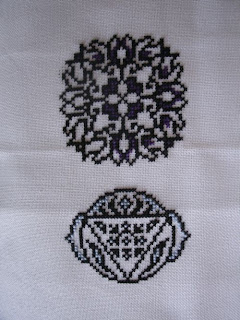 And here it is after I worked on it again this week filling in the colour. 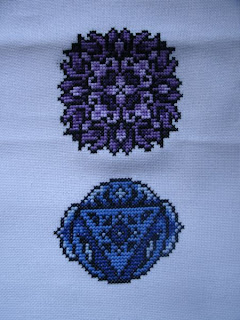 I took Mary away to Wales with me to work on until I had my Birthday start and made quite good progress on her. 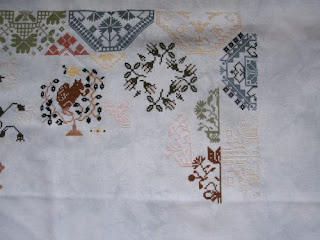 It's been a while since I shared an overall pic of her. 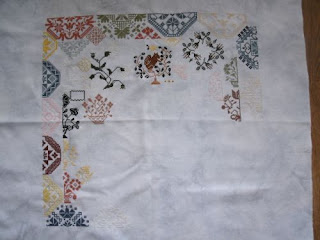 It seems that alot of folks didn't see my giveaway until I posted my TUSAL so I'm going to take a few days to think about what to do about it
Posted by Lindsay at 22:57 9 comments:

Yes I k now I'm a little late but I was busy buying beads yesterday and then spent the evening with DD1 who here visiting for the week.

Had a lovely time in Wales last week and don't have any pics to share because we didn't really do anything worth recording although several were taken at my birthday meal.
Speaking of my Birthday I was somewhat surprised to see that only 2 people entered my giveaway!

On to the TUSAL, this time there are Orts from Mary Wigham, Normal is a Setting, CdC, Needle & Thread fob, 4 Seasons sampler, Namaste (my birthday start) and of course a pile of K O and Nymo from beading. 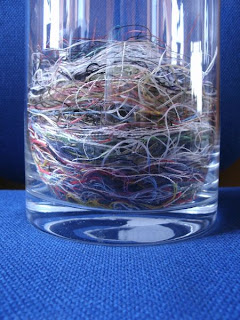 Today is my 40th Birthday and to mark the occasion I decided to do a giveaway.
I gave you a sneek peek at the colours last week but gave no hint as to what it was if you remember,  well all is now revealed :)

It's a needlecase for those that don't know or haven't seen one before, I was going to post a pic of it with the lid on but thought that might leave folks scratching their heads wondering what on earth it was!

DBF has taken me to Wales for my birthday so I'll do the draw when I get back and may well pick up extra bits while I'm there. 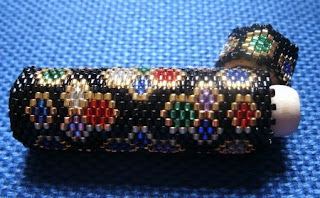 Anyone is welcome to enter and there's no jumping through hoops to enter either, having to advertise my giveaway on your blog as a condition of entry annoys me!

Any regular commenter's who enter will get an extra chance.
Please make sure I have your email so I can get in touch

I'll close entries at Midnight (GMT) Saturday 19th and fingers crossed I'll get chance to draw a name on Sunday
Posted by Lindsay at 11:43 16 comments:

I've spent my weekdays so far this month working on my 4 Seasons Sampler (last update is here).  I wasn't ready to put it down and move on after the first week so carried on with it.  Have I said how much I'm loving working on this but I also know that if I carry on with again when I get home from Wales I'll end up not loving it for a while and I would really like to finish it this year.

So anyway here's a complete view of it so far 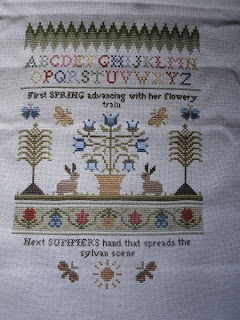 And a closer look at my progress 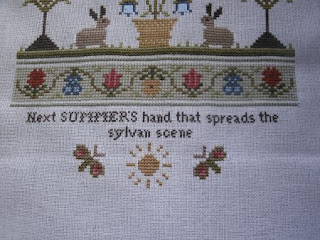 I spent time at DBF's over the weekend so didn't make huge amounts of progress on MW but all progress is good.  I did realise that I'd started the squirrel in the wrong brown but decided that since he was going to be brown and not blue/green/ pink etc it wasn't going to a problem and just makes my MW a little more unique :) 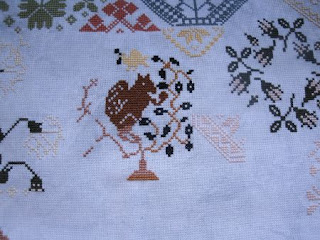 One week today I turn 40 and I'm going to have a giveaway so I thought I'd share a pic with you that gives you no idea whatsoever what it is but at least shows it colourful :) 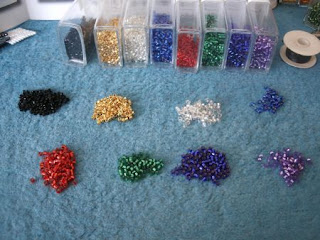 When I posted my stocking finish a couple of weeks back Silverlotus asked how much my small beading projects can cost so this is as good a time as any to answer.

I'll use said stocking as the example as it only uses 3 colours and becasue it's from Jill Oxton I know how many beads of each colour were used which makes it a little easier.

Hope that answers it for Silverlotus

The Good, the bad and progress

Let's get the bad out of the way first.

On Monday while towing my Parents caravan back from Burford a gust of wind made it snake and despite doing exactly what I should of done I hit the barrier and ended up with the caravan on the hard shoulder and us across the first 2 lanes of the M6 at 90 degrees to it.
I am so grateful that the wagon driver behind me saw it coming and slowed down which in turned stopped the traffic in both lanes as another wagon driver slowed down in the centre lane or I'm sure I wouldn't be here now writing this. 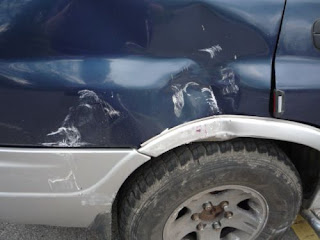 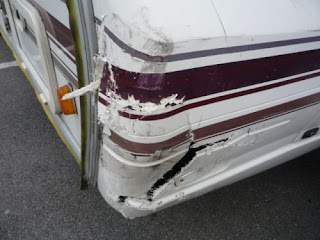 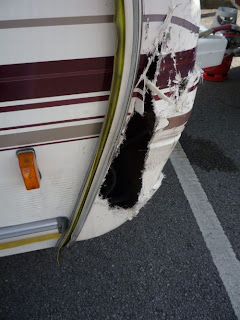 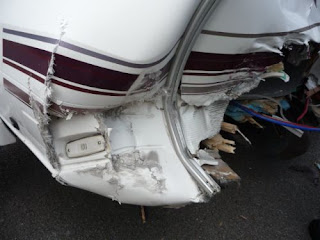 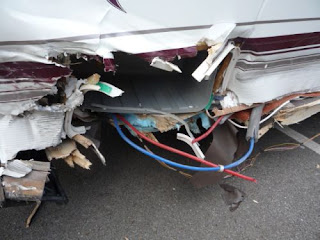 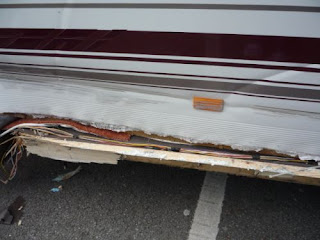 and the rear right corner that took the first impact. 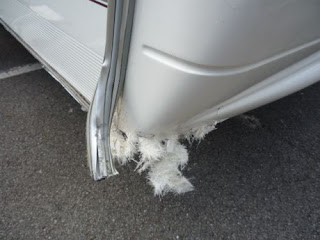 As well as the damage I've shared, cupboard door were broken off , contents spread everywhere, both the cooker and fridge have moved sideways and up, seats at the rear have moved and since fallen apart completely and I even managed to break several unbreakable plates and cups but 2 pint glasses survived unscathed!
We are fairly certain it's going to be a write off but won't find out until an assessor has been out to have a look

On to the good.

The first of Mel's leopard gecko eggs hatched this morning, 2 more to go for now at least. 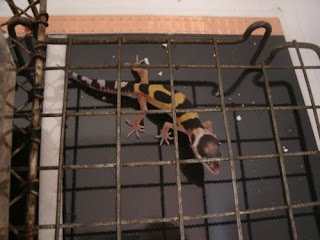 And lastly the progress.
Over the weekend I finished the green and pink motif, did the 2 pink ones and the brown one and made a start on another 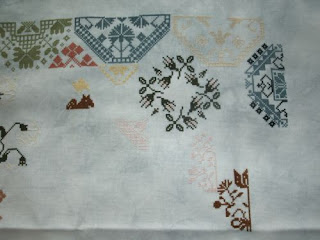 For April I said
Stitch an ornament  I did a beaded one instead
Finish Scary Book  Finished it Easter Monday
Start getting supplies together for my Birthday start next month  The chart has been ordered
Pick a Rose to stitch for Mel's 21st later this year  I have the chart in my hands
Try and do the fob this month!  It's stitched but not finished