A couple of finishes

Both are off to SOLAK for a lady who loves the USA.
First is LK Liberty freebie from a quite a while back 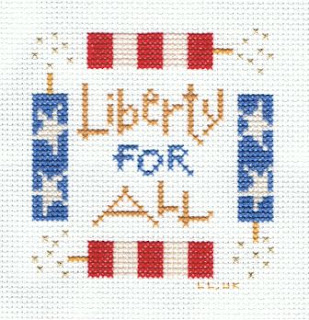 Second is from an old issue of JCS 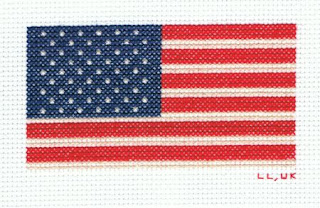 I've had a leap year start this evening, Enchanting Liar's Be A Dragon, so far I've done maybe 30 stitches then put it down to come online before heading for bed

The Riddle is finished 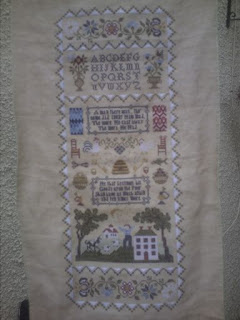 I finished Saturday lunch time and 30 mins later was on the road to take it back to Chris!
I hope to have a pic of it framed in a few weeks as Chris is going to be at Sewing for Pleasure at the NEC and I'll be going as normal so if I get chance I'll take a pic
Posted by Lindsay at 00:12 2 comments:

First of all I finished the snowman I mentioned I'd started on Jan 17th, he's on a Sparklies Solitaire fabric and I used all the called GAST and SSS 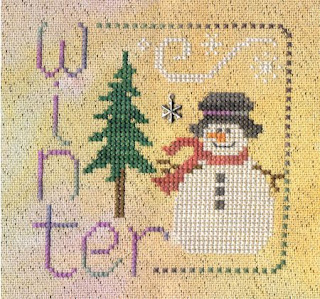 Last weekend I went down to Joy's for the GTG she mentioned earlier in the week and had a great time although I did spend a small fortune on stash! I've been meaning to take a pic of it all week and haven't got round to it yet, maybe tomorrow I will (well today really as it's 1.30 am as I write this!)

Mum is currently in the local hospital after having her right knee replaced on Tuesday, I went to visit her for the first time today (I stayed away because I had a cold) and she's doing well, she can do the bend but not the lift she needs so she's going to be there at least another day.

DD#1 moved into her new house on Tuesday, she got a call on Monday and had until Wednesday morning to be out of the temp one or face paying £27.58 a day in rent on it.
I walked out the door at 7.30am and didn't get walk in it until 10.40pm (ish), that was a long and tiring day!
Tuesday was also the 2 year anniversary of my starting life on my own.

Friday I went to Chester Cathederal to see The Quaker Tapestry that's visiting all this month, they have roughly half of it here and was really impressed by it, the pics on the web site don't do it any justice at all esp. The Prism it's so much brighter IRL and has mettalics that just don't show in the pics.
If your in this area and have the chance to go then do, it's worth the trip and entry to the Cathederal is free while it's here so you can be a tourist as well if you've not been there before
I saw 6am for the second time in a week to go something that normally happens once every few months if I'm unlucky, I'm really not a morning person and getting up at stupid o'clock means it can take me several hours and a few coffee's to become human

DD#2 has spent her half term week doing some work experiance at a local pet shop, although she did 2 weeks at a stables last summer they can't count as the 2 weeks she's needs for Reaseheath because she want's to do animal care and not Equine.
She's has enjoyed and catching fish is fun she tells me although she did complain about one full time member of staff that was always taking over whenever she or one of the other work experiance girls was in the middle of dealing with a customer.

DD#1 texted me a couple of days ago to say that the baby's head is down but could still move again in the next week or so and that's he's bigger than he should be.
My gut is telling me that there's no way she's going to make it to March 23rd if the head is down already but all we can do is stick to the plan of my going down there over Easter for the time being.

A few days later than planned!

For January I said
Finish the Riddle No but I made good progress
Start all the new projects I want Yes, inc. a couple I didn't plan on
Try and work on a WIP or two Crimson Poppies and an old UFO got worked on

For Feb I would like to
Finish The Riddle
Finish one of the small new starts
Maybe do an ornie
Make some progress on the Birth Sampler
UFORR
Work on my Peacock Chair
Posted by Lindsay at 11:03 1 comment: 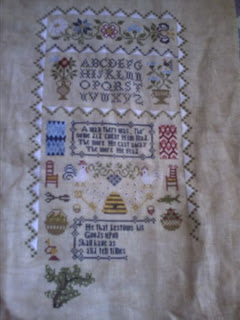 Not much more to go now, just the rest of the band that's got a tree top, the block of writing to finish, a repeat of the top band and the remaining border
I'm spending the weekend with Mermaid and Monday with Fantasy Sampler so I'll be back to it on Tuesday after I've done my hour on my UFO and aim to get that band finished by the end of the week

All day today I've been trying to get into Webshots and I can't :( I've no idea if it's just me or if they are down for some reason.
I want to add the pic to my album so I can post it on the BB's I visit because I'm not that keen on directing people here but if it's still the same tomorrow I guess I'll have to

I'll post my monthly goals tomorrow at gone 1am I really should be heading for bed!
Posted by Lindsay at 00:55 No comments: