Puter was fixed late Tuesday afternoon but between getting it sorted to how I wanted it, uploading software and being out most of yesterday I've not had chance to get pics sorted of the stitching I got done while it was sick.

First we have the Ornament I sent out for the CSC Exchange I'm really pleased with how it turned out, the fabric behind is the backing.
This ornament represents a milestone for me, I mastered my sewing machine :) For years I've not been able to sew in a straight line on a machine despite my Mum's patience in teaching me, it's Thanks to Liz and Lorchen and all the hints and tips that I did it 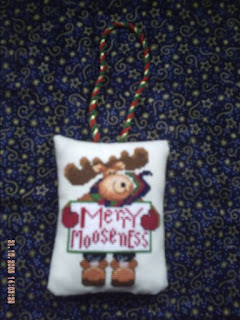 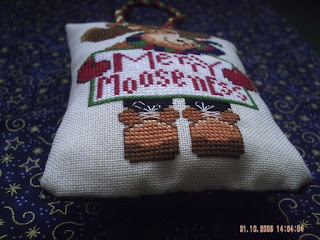 Merry Mooseness
Something in Common
JCS 2002 Ornament issue
This is the one I received from Kristina it's a Sweetheart Tree designs from a JCS Ornament issue but I have no idea which, I love it and it's going to hang seperately from the tree 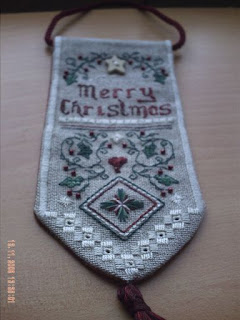 And lastly a few days ago I received my prize from Susan the orginal giveaway included a box of chocolate but I said that she should eat them herself or give them to someone else as I'm Diabetic and they prob. wouldn't of made the trip over the pond very well so she included some GAST instead. The pics doesn't pick up how much the keyring sparkles when the light hits it but it's dull here today and this was the best I could do 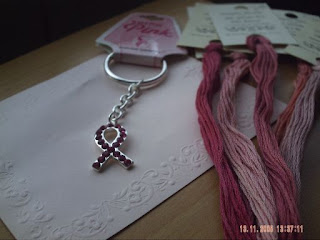 I'll be back later with WIP pics but right now I'm going to have lunch
Posted by Lindsay at 13:03

Yay...Lindsay is back. The ornie you made is adorable.

Oh, I love chocolate but I'd trade it for GAST any day!Great win!

I love your moose ornament!